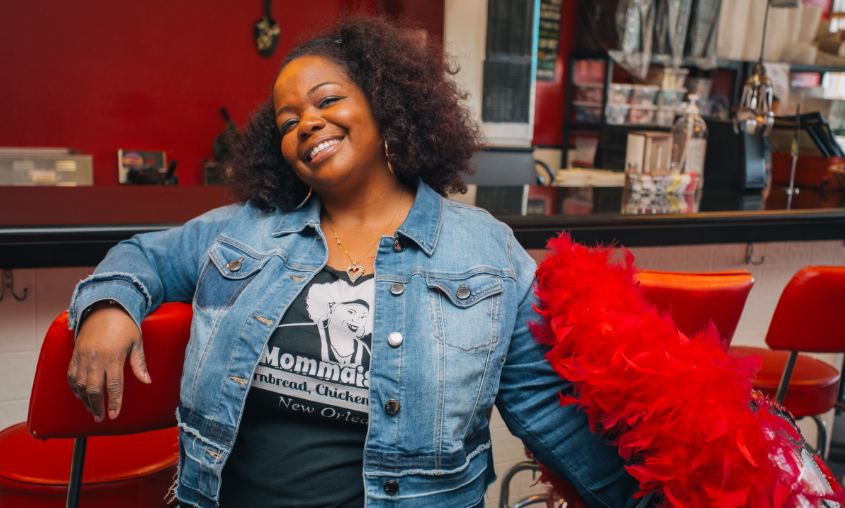 New Orleans is a top destination for those seeking exotic, rich, and wonderful food; cuisine is one of the main reasons that people say they want to visit the city. Our famous culinary traditions that were formed over hundreds of years have been handed down from generation to generation in the kitchens of the most renowned restaurants and in the kitchens of the humblest homes.

LCI Workers’ Comp member Ma Momma’s House of Cornbread, Chicken & Waffles was opened in 2013, but the dishes that populate the mouth-watering menu were crafted throughout time in the kitchens of the people who founded the business and their loved ones.

Ma Momma’s House co-owner Nicole Mackie is New Orleans born and bred, and she’s happy to help feed our citizens and those who have traveled here some authentic and delicious soul food straight out of her kitchen.

Nicole proudly declared that she was born in Charity Hospital. Though she grew up in a challenging environment, she knew that she wanted to become someone who would lift up the community that she came from and other marginalized communities. She said, “I grew up in the 7th Ward in the St. Bernard Public Housing Development, then my family moved to another housing development, then to the Fisher, then New Orleans East, and now Gentilly. So I’ve lived in New Orleans my entire life.”

Nicole enrolled in Xavier University in the late 1980s, and she was working several jobs in order to support herself and pay tuition. This time in her life made her understand and appreciate having a strong work ethic. She explained, “Xavier University has a slogan that says, ‘Leave ready.’ And I say I left ready. The professors, the administration, everybody cared deeply about each and every student. I always tell people, ‘If you go to Xavier and fail, the only reason is because you don’t care.’ If you care, professors will take the time to do whatever they can to make sure you understand. I had professors that would put their home number on the blackboard so that we could call if we had questions while we were studying for exams.”

The professors that Nicole spoke so highly about were the very people who helped her stay in school when times got tough. “When I graduated from high school, I didn’t have any scholarships. I didn’t know about scholarships, I didn’t know how to attend college, but it was something that I wanted to do. I had professors that recommended me for scholarships so that I could reduce the financial burden to myself. At the time I was working three jobs, and I was short funds to cover my tuition. I had professors to help me to find those resources so that I could stay at Xavier. It made me appreciate the importance of having people to support and guide you.”

After graduating, Nicole landed a job in the bank business in Baton Rouge. She made the hour-long commute from New Orleans every day because she wanted to stay in her hometown. Due to her outstanding work performance, she progressed to a regional position. The position, however, was taking a toll on her. “I audited retail bank branches. My last job in banking I was a national sales director for a large banking institution, and I covered Louisiana, Texas, New York, New Jersey, and Maryland. The career path was growing exponentially, but I needed to make a change because my health wouldn’t allow me to stay in the banking industry,” she recounted.

During this time, Nicole married a man that she had known for most of her life. Earl Mackie’s drive to succeed as a business owner and philanthropist was perfectly aligned with Nicole’s goals. “My husband’s first cousin is married to my mother’s sister, so we’ve been knowing each other since we were five years old. In 1989, we started a non-profit and television show called Positive Black Talk. We did the television show where we brought in people to talk about things that were more positive and reflective of the African American community. At the time I was a young person living in public housing walking over dead bodies. It was a really negative thing, and every time you saw people of color on television was on the news; it was always some type of crime. It was important to us to change that stereotype so that viewers could see people that looked like them doing great things so that they too could aspire to greatness.”

As Nicole was making headway in banking, her husband Earl was starting and maintaining several businesses including a restaurant in New Orleans East. Nicole said, “My husband Earl is a serial entrepreneur. I’ve always been the girl who wanted a 9-to-5, guaranteed pay check with benefits for security purposes. My husband has always seized opportunities to create new things.”

Chicken In The Fryer

Earl’s restaurant closed down about the same time that Nicole left her job to focus on her health. Then Nicole, Earl, and Nicole’s sister Rene Porche’-Poyraz decided to go into business together by reopening and rebranding the restaurant. Ma Momma’s House of Cornbread, Chicken & Waffles in February 2013.

The Mackie Family has been making their restaurant thrive, but it didn’t come easily. They had to work together to figure out who should have control over each aspect of the business so things could run smoothly. “We’ve been able to define each other’s roles and capabilities. I like to say that my husband is the visionary. He comes up with the ideas. I’m the refiner; I make sure that the ideas make sense. My sister was the executioner; she made everything happen. With the three of us having these different skill sets, it afforded us to do great things inside the restaurant as well as with marketing, advertising, and things of that nature,” said Nicole. “Sometimes as an entrepreneur you’re wearing so many hats, it’s hard to keep a pulse on everything. When it’s the three of us, we’re able to focus on different things. Sometimes, I think small businesses do miss certain opportunities because they’re trying to juggle so much. And that’s why it’s important to have a team that you can count on and support so that you can focus on the things that you’re great in to make the business better.”

You can find Ma Momma’s House in many locations other than at their New Orleans East restaurant. They like to bring their famous brand of fried chicken and waffles to events like Essence Fest, the Voodoo Music & Arts Experience, and the Fried Chicken Festival. When asked, however, if Ma Momma’s House will ever move from The East to another permanent location in the city, Nicole said that Ma Momma’s House will stay put for a very important reason. “New Orleans East is the largest land mass in New Orleans. Prior to Katrina, it was a very lucrative area for business owners, residents, and the like. Post-Katrina, we’re still trying to get anchored in eastern New Orleans. We just lost Lowe’s. We had a mall pre-Katrina. There’s still blight. I would say that there’s definitely room for more work to be done as it relates to economic development. That was one of the reasons why we chose to come to New Orleans East, and that’s another reason why we advertise so hard because we want people to leave downtown New Orleans and venture to eastern New Orleans to support businesses there.”

Nicole is not modest when it comes to the deliciousness that comes out of Ma Momma’s House, and she wants everyone to come out and give it a try. She proudly said, “We are the originators of chicken and waffles in New Orleans. We were the first to offer and bring chicken and waffles to the city. We have hot, mouth-watering cornbread. Fresh-squeezed strawberry lemonade, made-to-order fried chicken, and if people are interested in experiencing authentic soul food from a New Orleans kitchen, they should definitely come to Ma Momma’s House of Cornbread, Chicken, and Waffles.”

You can learn more about Ma Momma’s House of Cornbread, Chicken & Waffles at Mamommashouse.com.