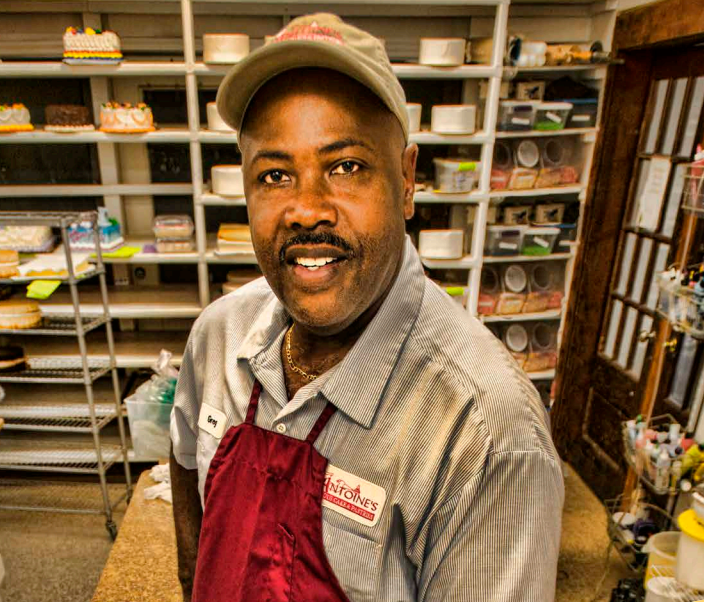 At age fourteen, Greg Antoine took a part-time job in the donut shop where his father worked. He enjoyed the work and began working full-time in a bakery after graduating high school. Greg spent years working in bakeries and grocery store bakeries, absorbing all he could about the craft. He learned how to create a variety of cakes and pastries–including the king cake–and he learned the art of cake decorating. Without any formal training, Greg is a self-taught baker. He learned by watching, by doing, and by asking questions. When his shift was over, Greg would continue to practice baking and decorating on his own time to learn and evolve as a baker. With the encouragement of a close friend, Greg set out on his own and opened Antoine’s Bakery in the same location where it stands today.

Antoine’s early success was the result of winning a contest Greg didn’t even know he had entered. Shortly after opening Antoine’s doors, a friend purchased a king cake and entered it into a contest. With a steep increase in customers in a short amount of time, Greg pondered his increased popularity. It wasn’t until a customer told him where they had heard of his bakery that Greg learned about his victory. To this day, Greg attributes winning the contest to the bakery’s success. Winning the competition created a loyal customer base upon which he was able to build his future success.

Greg Antoine did not invent the king cake, but he did put his own personal spin on it. As a child, Greg’s father would bring home king cakes with granulated sugar on them. Greg did not like this type of king cake, so when he opened his own bakery, he decided to make it the way he likes. Instead, Antoine’s ices its king cakes then drizzles different colored icings over the white. Since Antoine’s makes king cakes throughout the year, the colored icings change: pastels in the spring, black and gold for football season, red and green at Christmas, and, of course, the Mardi Gras colors of purple, green, and gold during the first two months of the year. During Carnival, the king cake season, Antoine’s makes approximately 3,500 king cakes per day, a substantial increase over the 50 per day they made in the early 1990s. Antoine’s king cakes can be found at Antoine’s bakery and in Walgreens stores throughout the New Orleans area.

Regarding future plans, Greg wants to keep making the best king cakes and desserts he possibly can. For the lifelong baker, sharing his king cake with the world remains Greg’s main priority.

Antoine’s Bakery is located at 1300 Stumpf Blvd in Gretna. To learn more about Antoine’s Bakery, visit antoinesfamouscakes.com. All of Antoine’s offerings can be pre-ordered on the phone and via the website. Antoine’s also ships its king cakes anywhere in the United States. Call 504-368-6222 for more information.