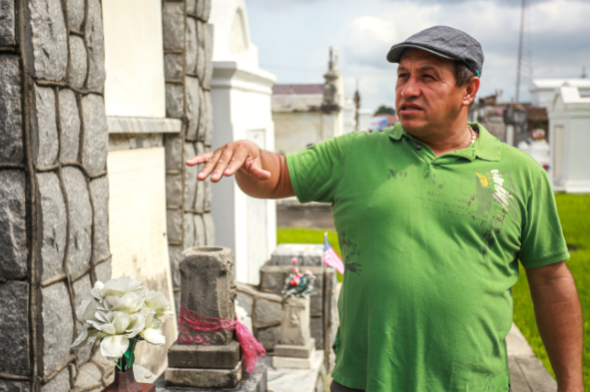 In 2010, the famed and eccentric actor Nicolas Cage inexplicably purchased a plot in St. Louis Cemetery No. 1 in New Orleans. The centuries-old cemetery which opened in 1789 is the final resting place of several famous and infamous New Orleanians like the Voodoo Queen Marie Laveau and the city’s first African-American mayor Ernest “Dutch” Morial. While it’s highly unusual (and nearly impossible) to purchase space in this historic cemetery, it’s even more unusual to build a brand-new tomb in it that’s unlike any other tomb in New Orleans.

Cement expert German Sarmiento has been contracted to repair the unique above-ground tombs of New Orleans once they fall into disrepair. He was also contracted to create the mysterious pyramid-shaped tomb that Nicolas Cage commissioned emblazoned with the Latin phrase “Omni Ab Uno” which translates to “Everything From One.” German explained, “Not too many people know that I was the one who built it. I never got to meet him, but they approached me to see if I could build something like that. At the time, not too many people knew about it, but I knew that it was getting built for Nicolas Cage. I built it from scratch.”

The tombs of New Orleans are considered sacred by the religious authorities that own the cemeteries. Even if a tomb is crumbling, it is not sold to new owners or destroyed. Most people don’t know how Nicolas Cage was able to buy the plot, but German is proud that he can say he made Nick’s unique future final resting place with his own two hands.