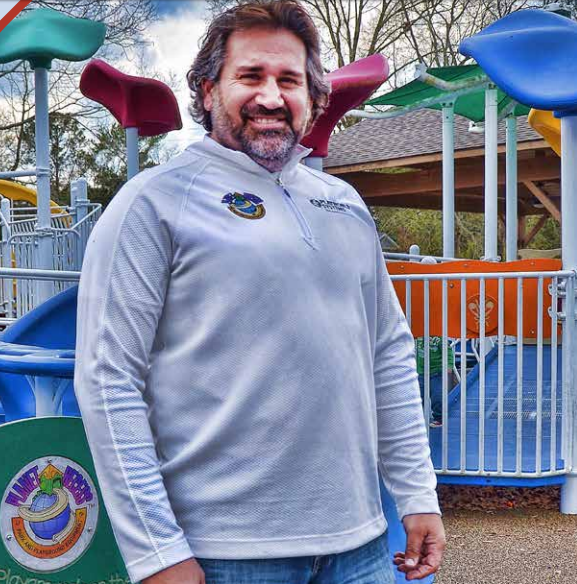 He Plays to Work Hard

Based in Baton Rouge, Planet Recess is a distributor, seller, and installer of playground and recreation equipment. Under the watch of Owner & President Treynor McAdams, Planet Recess has a team of six in the office, as well as independent sales people in the field. Since 1994, Planet Recess has designed and built custom playgrounds in Louisiana and Mississippi. Planet Recess’s team takes each project from the concept and design phase to completion, ensuring it is safe and ready for children to enjoy.

From McAdams Playgrounds to Planet Recess

A Baton Rouge native, Treynor McAdams moved to Eubank, KY in 1991 to work as a youth pastor at a church. In addition, he took on a part-time job with a manufacturer of playground equipment. Treynor quickly learned the business and grew to enjoy the work. He returned home to Baton Rouge in 1992 and opened McAdams Playgrounds. McAdams Playgrounds served as a distributor for Treynor’s former employer until 1994. At the time, they manufactured wooden playground equipment, but Treynor wanted to venture into metal and plastic equipment. To accomplish this, he restructured and rebranded. Treynor renamed the company Planet Recess and served as the company’s owner, salesperson, and installer. 1994 was a pivotal year for Treynor, and it was just the beginning for Planet Recess.

Planet Recess provides customers with all services required to bring a project from concept to completion. Before the project begins, Treynor and his team offer site evaluation and design. They then provide demolition of old equipment and installation of new equipment, including the concrete and base work. When the project is completed, they surface the grounds with mulch or rubber and provide ongoing maintenance services. They do all of this based on each customer’s needs, complying with all building codes and with the Americans with Disabilities Act (ADA). Planet Recess provides their customers with the playgrounds they want, as well as the peace of mind knowing that they will be installed professionally and safely.