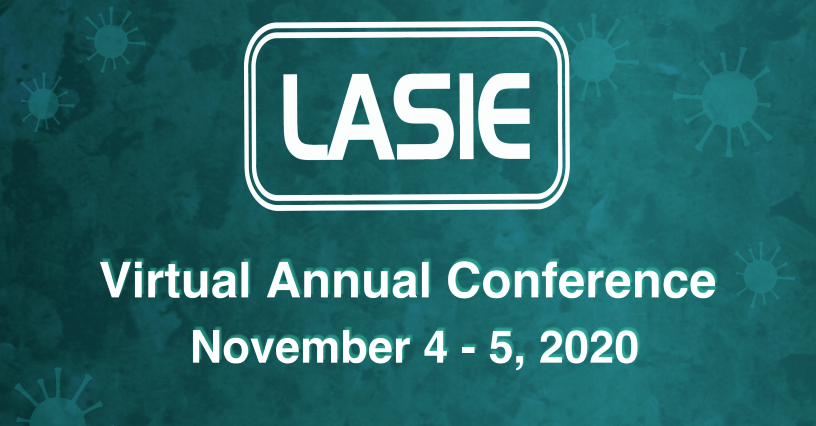 The Annual LASIE Conference was held virtually, and it was incredibly informative and entertaining. Despite not being able to fraternize and network like you normally would due to COVID-19 restrictions, the lectures and discussions underlined how the workers’ compensation industry and the industries that workers’ comp serves are responding to and adapting to the pandemic.

LCI sponsored a discussion entitled Positive Economic Growth in Louisiana. President & Founder of Loren C Scott & Associates Dr. Loren C. Scott thoroughly explained the former, current, and projected state of the economy of Louisiana focusing on the prosperity of different regions and how they were affected by hurricanes, COVID, and lockdowns. He also explained the role that the election has played in those issues and how the economy may react depending on who becomes the next president. He also discussed how oil and gas, construction, and tourism have been affected by lockdowns and how those industries may regrow depending on a myriad of factors.

The following discussion entitled Responding to COVID-19: Protecting Employees While Continuing Operations was particularly engaging because it illustrated the boots-on-the-ground response for customer-facing businesses. The Vice President of Workers’ Compensation & Safety for Waffle House, Inc. Elizabeth Bailey explained how many Waffle House restaurants had to innovate with items like shower curtains between booths and plexiglass between the cashier and customers to lessen the possibility of contamination. She lamented that Waffle House, Inc. had to undergo its first-ever furlough during this time. Alan Yacoubian Johnson, a partner in Johnson, Yacoubian & Paysse, implemented a temperature-taking honor system to identify symptomatic and asympotmatic COVID-positive people before coming into work, but there were issues with having people report their own temperatures. Dan Lickteig, Senior Manager of Corporate Functions – HR for Procter & Gamble, also spoke on how reluctant his company was to begin daily temping of employees, but eventually implemented it.

Dane Ciolino, Professor of Law at Loyola University College of Law, brought up various recent ethical issues for the Ethics For All lecture. His blog Louisiana Legal Ethics covers specific questions like may a lawyer accept compensation from a service provider for a client referral, must lawyers have or report malpractice coverage, and are unusual contingency fee agreements lawyer-client considered business transactions.

LCIA, the member services arm of LCI, sponsored the Civil Justice Reform Act of 2020 with Wayne Fontana and 28th District State Senator Heather Cloud. Senator Cloud took an interest in insurance premium legislation because she and her husband own a third-generation trucking company and were often affected by rising premiums. Described as “landmark legislation” by Wayne, Senator Cloud championed the legislation. We are the most expensive state for auto insurance, and we also sue more for accidents. “It’s the poorest of the poor paying these rates they can’t afford,” added Senator Cloud. The Senator highlighted how practices like unrealistic claims in lawyer advertising helps fuel extremely high premiums. If clients knew how much of their settlement would go to fees and court costs, they may not want to sue, exaggerate injuries, or fake accidents. Included in this legislative win, The Seatbelt Gag Repeal will be effective January 1 2021. Previously, jurors were not made aware of whether a person injured in a car accident was wearing a seatbelt. In Louisiana, all car passengers must wear a seatbelt.

The second day of LASIE began with a rousing talked called New Challenges in the Workplace: Dealing With Telehealth and Medical Delivery in Workers’ Compensation and Health Benefits. This has been a hot topic in comp for several years as technology has quickly improved in telehealth, and both doctors and patients are opting for the convenience that telehealth visits afford them. Dr. Lisa Figueroa, National Medical Director of Telemedecine for Concentra, explained that telehealth is a great option for many workers’ comp claims, but not all of them. Can you perform a thorough examination on camera, she asked. For some injuries it can. For example, a mildly injured limb or joint can be examined in part by comparing it to the corresponding limb, asking about numbness and tingling, and performing strength exercises. Co-morbidities in the aging workforce and how they can lead to workplace injuries were scrutinized by Mollie Kalen, CEO/President of MKCM, Inc.

Next, Chris Rodrigue, CEO of ACR LLC Executive Consulting, spoke on how basic communication issues can wreak havoc in your business in Organizational Culture – The Missing Pieces. He spoke on issues that staffers are specifically dealing with this year, and how it is straining engagement within and outside of the organization. Chris said, “The only thing COVID has done is magnified problems that already exist.” Clarity starts with a culture that focuses on setting clear expectations: how are you expected to behave, what are the results you’re expected to produce, and how do you get promoted and earn more? He used to work in the restaurant industry and explained how strong training programs can strengthen your workforce by giving them expectations. Culture is important because it creates alignment and creates a more enjoyable work experience.

LASIE ended with the lecture The Timing of Physical Therapy for Low Back Pain: Does it Matter in Workers’ Compensation. Economist Dongchun Wang who studied medical practice patterns and medical care delivered to injured workers explained that Louisiana workers the could benefit from physical therapy tend to get it too late to be extremely effective. “Early PT (within 30 days postinjury) is associated with lower medical utilization and costs, and shorter TD duration.” They were also less likely to be require opioids, MRIs, and lower back surgery.

We would like to thank everyone who participated in this virtual conference and look forward to seeing everyone at LASIE in the future!