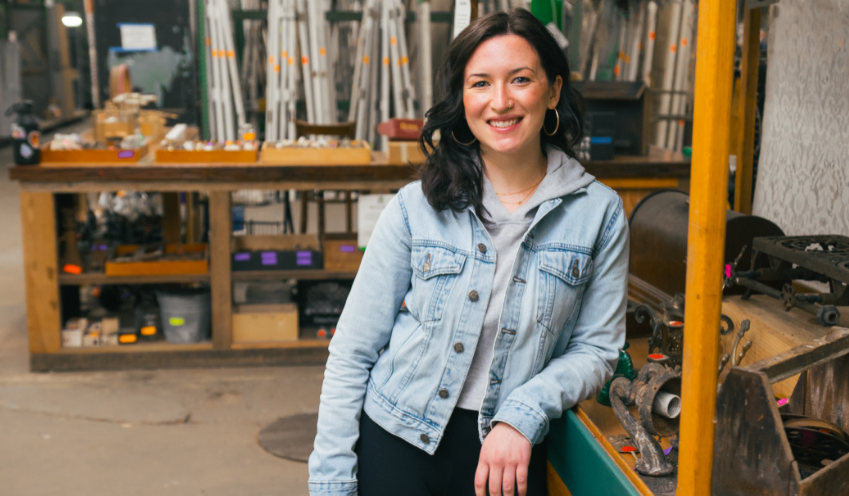 The state of Louisiana needs as much help as it can get for healing the environment. As much as Louisianians enjoy the lush greenery and vast number of waterways that abound, we don’t seem to take care of our environment in the manner that it deserves. One of the people working hard to get environmental action going in the right direction is Hailey Allison, the Executive Director of the non-profit salvage store The Green Project in New Orleans, an LCI member business. She saw a chance to make an impact, and she’s taken it to heart.

Hailey Allison has lived all around the country, primarily living in California where she was born. The Golden State is where Hailey chose to get her higher education and worked for organizations that focused on helping the Earth thrive.

Working For The World

Hailey was extremely motivated to make a difference which is immediately apparent when she lists her work during and after college. She recounted, “I went to the UC Santa Barbara for undergrad, and I majored in Environmental Studies with a minor in Multimedia Communications. Starting in 2012 during undergrad and post-grad as well, I worked for a research institute at UC Santa Barbara, and their focus was on how to look at nature and create technology based on how natural systems work at a very micro level. I moved forward to work in their development sector where I was editing research proposals for submission for government grants and funding. It primed me for a career where you’re balancing the administrative side of things but also the fundraising side. Then in 2017 I worked at an organization called Resources Legacy Fund, and they’re a state-wide organization in California where funders will want to designate their philanthropic contributions to certain causes that are environment related.”

Hailey was ensconced in the environmental sector in California, but she was a small fish in a big pond. An opportunity came along that would allow her to have a larger role in environmental action far from her home in a place that doesn’t have as many resources as California. ”I landed in New Orleans because my partner became a medical student at Tulane. I also recognized that it is a small environmental sector in New Orleans, and that means that there’s that much more opportunity to make an impact. I think that in California, the environmental sector is very hard to make an impact in. Coming to New Orleans was such a great opportunity to have that community impact and have the tangible effects of the work that you’re doing. That’s ultimately what attracted me to The Green Project.” The Green Project takes in usable building materials like doors, sinks, flooring, and tools that would otherwise be sent to landfills and sells them to the public lower than retail price. Two million pounds of material is saved from the trash, and customers save money on their wares.

Starting as a cashier in 2018, Hailey rapidly worked her way through The Green Project’s ladder from Communications and Development Manager all the way to Executive Director in August 2019. The Board of Directors was happy to choose her to lead the non-profit organization because they recognized her potential to take it to the next level. “It’s kind of a wild story about how I ended up becoming the Executive Director here, but it all worked out really, really well. I think that having been a salvage store employee has given me a very robust perspective on the organization because I’ve seen every side of the work that we do.”

Though The Green Project existed for nearly 30 years before she arrived, Hailey had a mission to make the organization more financially stable to ensure its longevity. She said, “What I found coming into my original position and doing fundraising is that there were many recurring ideas of what the Green Project should do that had literally spanned decades. When I had the opportunity to become the Executive Director, I knew that a primary goal of mine would be to build in that business sustainability to the organization across all departments from the admin side to the operations side to the fundraising side just because I’ve seen how much has gone into the organization and how much has been lost due to people who build up these programs then leave, taking institutional knowledge with them.

In that sense, we scaled back our programming quite a bit so we could press the reset button to get all of our operations in order. That way, when we go to regrow which we plan on doing in 2021, we’re going to have such a strong foundation and not worry about administrative nuances. We have such a closed loop now moving forward that it’s hopefully going to make our work even more impactful.”

Hailey used tactics like organizing the products on the floor in a more logical way, color coding price tags, and regular social media posting to grow the infrastructure within the salvage store operation and rewriting the internal documents to formalize the administration. With these changes, Hailey hopes to have less turnover, higher store profits, and more community outreach. “Previously, there weren’t any standard operating procedures for paint recycling or the salvage store. We looked at what was most important in those areas and thought how could we make sure that we’re being efficient with staff time and with the resources that we have. From there, I wrote out the priorities of each program, goals, and how we’re going to execute that on a timeline. Fundamentally, it was a rewrite of the entire organization. What we’re doing is the same, but how we’re doing it is completely new to The Green Project. We cleaned out the entire store, we gave everything for free to give back to the community and also create space for us to be able to organize, and we restocked with fresh materials. We have a new system in the store where we’re tagging everything with color-coded stickers so we know how long it’s been here and we’re progressively discounting that so that we can make the best use of everyone’s time and the materials we have in the store.”

Hailey was so determined to make The Green Project work that she made it her project for Women4Climate, a global mentorship program for influential women working to raise awareness and create action on climate change. “I wanted to get involved with Women4Climate and focus on how we can reduce waste specifically at festivals. However, when I got accepted to that program, I was accepted as the Executive Director of The Green Project. Last fall was very tough on the organization. There were moments where we didn’t know if we would exist in the future which is the harsh reality of being a non-profit. But by being able to focus on The Green Project in creating a sustainable business model for an environmental non-profit, I was able to continue with the Women4Climate program.”

Dana Eness of The Urban Conservancy, LCI’s partner association, helped mentor Hailey through this change of plan. Dana said of Hailey’s work for Women4Climate, “What immediately struck me about her was her ability to face big operational challenges head on and ask a lot of questions in order to make informed decisions about necessary but sometimes difficult adjustments to her organization’s business model. Not only is the Green Project’s mission focused on sustainability, but Hailey’s making sure that its operations are sustainable as well.”

Just as Hailey’s work was gaining steam, the world around her shut down. She continued, “Then in the springtime, COVID-19 hit. It was just chaos after chaos, but I was already in the mind set of re-envisioning how the organization should function. When COVID-19 forced us to close the salvage store, I think I was well primed for how to navigate through that situation and to focus on our internal operations. Dana absolutely held my hand through the chaos of being a non-profit Executive Director

The Green Project does more than take in materials and resell them; the non-profit actively promotes environmental education, a key component of its mission. Hailey also helped streamline their educational work. She explained, “The Student-Led Recycling Initiative is where we create a coalition of students that we train on sustainability, environmental justice, communication, and how to be an environmental steward, and those students are tasked with teaching their school about recycling and implementing a recycling program. A lot of the schools in New Orleans don’t recycle because they don’t have the capacity to implement the program, they don’t have the funding to pay for it, or it’s just cumbersome to get it launched. We step in to help supplement that to lay the foundation and help coordinate the recycling contracts so all they have to do is implement it.” The program helps to empower students and encourage their peers to do the right thing for recycling.

When she’s not working to save the planet, Hailey likes to explore New Orleans’ vast culinary landscape and natural landscapes. “My favorite thing to do is to eat in New Orleans. I have truly enjoyed trying many, many different restaurants. When everything shut down, that was one thing that I was so heartbroken about. I haven’t been eating out much lately, but I have been trying to enjoy the outdoors. I have a dog, and my partner and I love taking her out to the parks to enjoy the city. Just to try to feel as much a part of a community as we can all things considered,” she said playfully.

Take a trip out to The Green Project to peruse their wares and purchase some items to upgrade your home. “I would just like to emphasize that we are open, we are stable, and we are looking forward to growing our programs in 2021. We have all seen and experienced the effects of climate change; we are seeing extreme storms, we are seeing fires across the world, mudslides and crazy climate events that really point to climate change being a factor. I think people are understanding more the pressures around it, and it’s about figuring out how everyone can do their small piece to collectively create a more sustainable New Orleans and a more sustainable world.” Learn more about The Green Project at https://www.thegreenproject.org/.