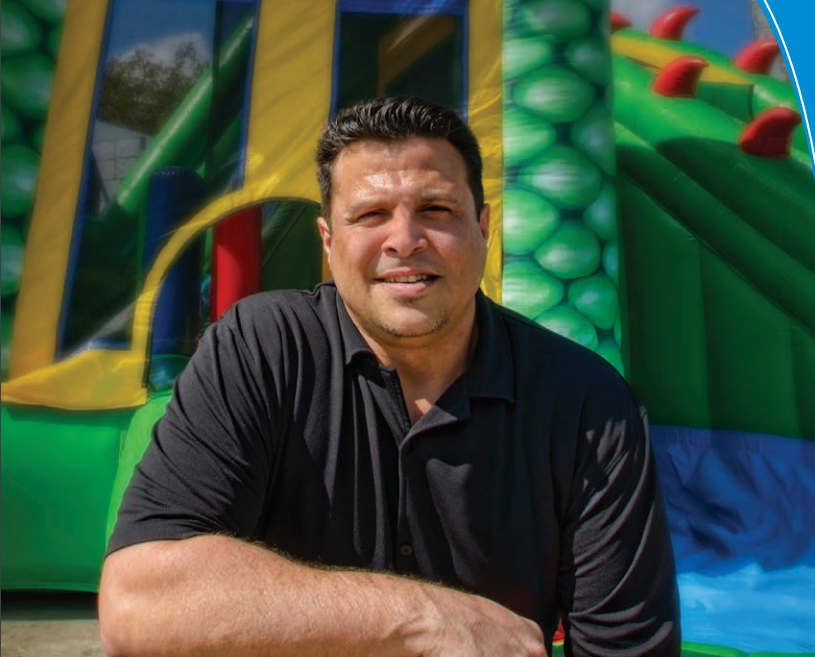 Castles, Slides, and DJ the Dragon

Acadiana FunJumps owns more than 200 inflatable units, which include bounce houses, water slides, ball pits, and obstacle courses. Jacob and his team stay busy on weekends throughout the year, but they are busiest during the spring and summer months. In April and May, with graduation parties, church picnics, and other spring festivities in full swing, Acadiana FunJumps rents 150 units per weekend.

While each inflatable is custom ordered, Jacob decided he wanted to create a special inflatable, unique to FunJumps. He collaborated to design a bounce house shaped like the company’s mascot, DJ the Dragon, with the name DJ representing the father and son duo “Doug & Jacob”. He even traveled to China to oversee the production. There are now five DJ the Dragons, one of which stands guard of FunJumps’ castlethemed office on Johnston Street.

Due to the Williamson family’s success, the word “fun jump” has become the generic term for an inflatable bounce house in the Lafayette region. Acadiana FunJumps was the first inflatable rental company in the region, and as Jacob explained, they have a registered trademark on the FunJumps name. Jacob described people’s surprise about the trademark. “They ask me, ‘how can you have a trademark on the word FunJumps?’ I have to explain that it was the name of our company before it was the commonly used name. I think that’s really a testament to our success.”

While Acadiana FunJumps was the original business founded by Doug Williamson in 1985, there are now six FunJumps franchises in Louisiana. Jacob Williamson established the corporate entity FunJumps USA, the umbrella company under which all of the franchises fall. Jacob still owns Acadiana FunJumps as a franchise, and he explained that he has a good relationship with his other franchisees. “I have the inventory and the facilities well beyond what any franchise could have, but we share inventory. Instead of a franchise offering their customers just one or two options, customers can tap into our entire inventory. We store everything in our warehouse, and the franchisees even use our facility to clean them when they’re done.” Jacob also explained that FunJumps utilizes an inventory management software that was designed specifically for the inflatables rental industry.

With six franchises, one can naturally expect FunJumps to continue to expand. Jacob cautioned against forcing growth at a faster pace than is “organic.” He remains committed to maintaining good relationships with the franchise owners. Jacob wants to continue to grow, but he also wants to do so at a rate that allows the franchises to continue to share inventory and resources. With what he called “inside out growth,” he sees the service area radius around FunJumps’ Lafayette home slowly expanding into the future.