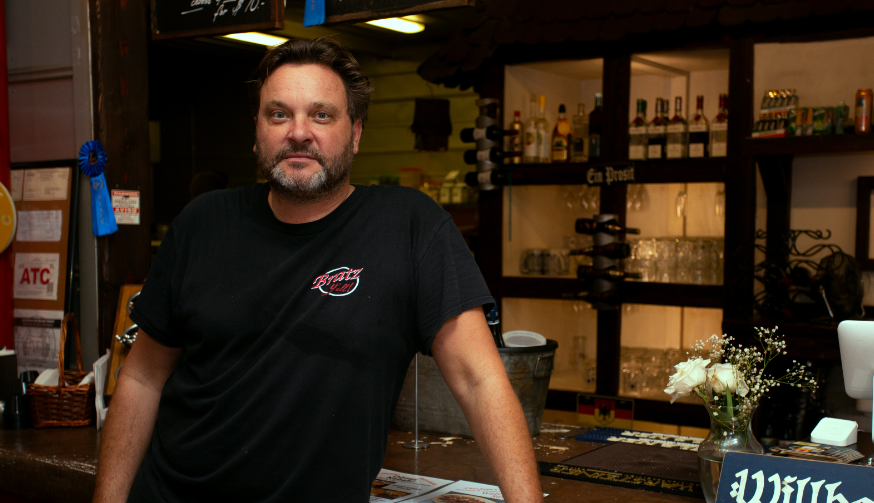 When people think about the world-famous cuisine of New Orleans, Creole dishes like gumbo, etouffee, and chargrilled oysters are probably the first things that come to mind. The truth is that New Orleans cuisine was cultivated from many different cultures living, working, and eating together. Waves of immigrants from the world over have traveled to southern Louisiana over the past 300 years, and they have lent their special culinary styles to the flavor that makes up the city’s menu.

Sven Vorkauf, the owner of LCI’s member business Bratz Y’all, didn’t know that he would wind up in New Orleans after years of international travel, but he’s proud to call it home now. He decided to bring his native cuisine along with him much to the delight of his regular customers and new ones.

Sven was born in Berlin, Germany to a family of expert chefs. He enthusiastically explained, “As a little guy, I was always in the kitchen with my family. The Germans love their bread. They have really big breakfasts, and it’s more good bread, good cheese, sausages, and salamis. We sit down for breakfast. It’s not so much sweet like here. We were always cooking at home, and my family had a little deli store in Berlin.”

Naturally, Sven enrolled in a program to learn even more about operating a deli. At 16, he was apprenticed at a deli that had been training budding chefs in the art of deli meats for a century. “After high school, I went to a three-and-a-half-year program to become a deli businessman. I learned in one of the best deli stores in the world called Feinkost Noethling at the KaDeWe Market. If you go to Berlin, you’re probably going to end up in one of these deli stores. KaDeWe has 4,000 different kinds of cheeses. We made catering for Prince Charles and Lady Diana when they came to Berlin. We made catering for Ronald Reagan and Mikhail Gorbachev when Ronald Reagan said, ‘Tear down this wall!’ I knew from that time on that cooking and food are my life,” he said.

In 1989, travel restrictions between East and West Germany were relaxed, and the Berlin Wall finally came down. It was a new chapter in Germany’s history, and it marked a significant period in Sven’s life when he was a young chef.  “I was still working and studying at the KaDeWe. People came in from East Berlin, and they were crying. They never saw so much food, and they never really saw exotic fruits or all these different things. It was a really crazy time, and it was a good time. There was a lot of hugging, there was a lot of crying, and people were so happy that the wall came down.”

The atmosphere in Berlin was celebratory, and it trickled all the way down into the culinary industry. Sven remembered, “When I was 19, finishing with my studies and got my certificate that I was officially a deli businessman, I opened some shops in Berlin and made good money. The East Berliners were looking for everything. These people were looking for cars, for new adventures, for clothes, for food they never had before. And these people had money. They were saving because they couldn’t buy anything in East Berlin. They changed their East Marks to real money, and they were spending it. They wanted to see the world.”

Sven’s businesses were very successful because of these newly-liberated people. By the time he was 24 years old, he decided to travel out into the world since he had already been so successful in his hometown. “The first time I traveled for six months. I had a company with probably 20 employees, and I put a manager in my position. I trained this manager for six months, and I said, ‘Okay, bye bye.’ Made sure I had a little money in my account. I came back, and my company was still there. I was traveling through Italy, Spain, and France and brought in things Germany didn’t have. I remember I was in Italy, and I brought in all this dried salami, and I was driving back and saw them in all of these markets.”

After being home for a few years to tend to his shops, Sven took off again for over a year. This time, however, he found the place that would finally take him away from Berlin. “I was a chef in Australia on a boat, and I was in Thailand cooking and learned some tricks. I met someone in the Fiji islands from New Orleans, and, when I came to New Orleans, I fell in love with this beautiful city. I had deli stores in Berlin, but I was so in love with New Orleans that I sold everything I had: my house and my company. I came over here to New Orleans and started Bratz Y’all,” he said.

In A City Far, Far Away

Sven knew right away that New Orleans would be the perfect city to start a new business focused on making and selling the foods that he grew up on because the culture is just so focused on food and good times. “New Orleans is not really America, it’s a lot friendlier. New Orleans is this laidback food, music, culture. You say hello on the street to strangers, and I love that. You live outside. People like to go out and drink and eat and live the good life.”

The Beginning of Bratz Y’all

Bratz Y’all was a mere traveling food stand when it was first started in 2010. Sven explained, “I started in festivals and markets to give people a taste of Germany. We started with different kinds of sausages and pork roast. From the first day on, it was a big hit. Freret Street Market gave me the first chance. The first day, we were sold out. We had a line of 10 people all day!” Bratz Y’all can still be found serving brats and pretzels at many festivals like NOLA on Tap and the Voodoo Music & Arts Experience.

Bratz Y’all was such a big hit at festivals that Sven was able to buy a brick-and-mortar location for his creation. This particular location in the Bywater neighborhood was absolutely perfect because it already resembled the biergartens that Sven knew from home. “Bratz Y’all has been open for two years. It’s a nice spot, you can sit outside, we have these long tables. We want that. We want people to say, ‘Hey, can I sit here?’ You make friends, you have conversations, and you ask, ‘That looks good. What are you eating?’ I get a lot of messages on Facebook, and they say, ‘We have new friends!’ They thank me because you’re not sitting at a single table outside. You probably have to share a table with some people like in Munich and in real German biergartens. We like it, it’s beautiful; the Bywater is a beautiful neighborhood, it’s the new spot to be, and we’re happy to have this biergarten.”

There’s another reason that Sven loves Bratz Y’all’s location so much. He said, “I found out also, the Bywater was actually the first area where Germans settled. Hey, I think I belong here! Bring back German food, and we do everything very, very traditional. We do not Americanize things. This is the real deal, this is real German food like my grandma did or my parents.”

You can learn more about Sven Vorkauf and Bratz Y’all at BratzYall.com.